At the UKHO, we use data science to gain valuable insight into the data sets we hold and further our understanding of the marine environment around us.

One of our latest projects combines satellite imagery and computer vision techniques to enable us to automate the creation of new coastline data. 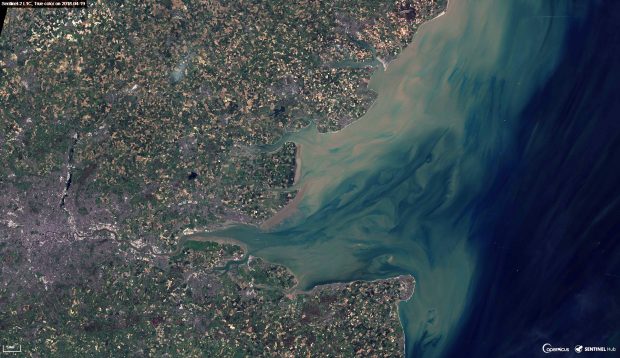 Automating the creation of coastline data was important to us for a variety of reasons. Firstly, we wanted to form the basis for performing global change detection. For us, this would help us to be more proactive in updating our portfolio of navigational charts.

Beyond navigation, this data could also help to support other activities carried out by customers and partners, including:

And finally, this would be a first step for us in producing much higher resolution data, that could then improve upon the accuracy and currency of other freely available coastline data sets.

This method needed to be fully automated, repeatable and able to cope with a variety of different coastline types found across the globe.

First, we gather free, open-source optical satellite imagery with 10x10m pixels (available in Earth Engine). Sometimes pixels in these images can be obscured by shadow and cloud. So, by collecting all images taken of an area over the course of a year, we were able to select the ‘best pixel’ for every individual pixel location. By combining all the best pixels, we created a single image of the whole area that was free from any obscurities.

From this single image, we then identify areas of water by calculating what is called the ‘Normalised Difference Water Index’ (NDWI) : a remote sensing technique that uses the green and infrared bands to indicate the presence of water.

On further analysis of our results, we then discovered that we needed to account for localised variation. To overcome this issue we calculated the land/water threshold for small areas dynamically using a method called Otsu thresholding, which finds the optimum value between two groups of pixels.

We then used the outputs from this pipeline to produce a vectorised image of the coastline using PostGIS.

The first data generated by this pipeline covers the British Isles (except for Rockall, which was too small given the resolution of the imagery).

Below you can see a data set of the British Isles, created using a total of 4,084 Sentinel-2 images: 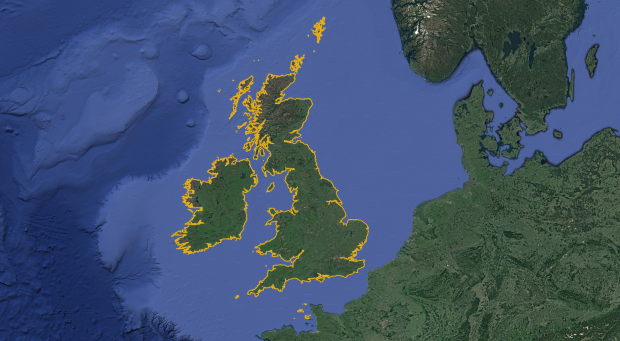 This is the first time that coastline has been automatically generated at the UKHO and the process is still being evaluated, developed and improved. As such, we are not producing this data for navigational purposes yet.

To assess the success of our method, we compared our results to the widely-used NGA World Vector Shoreline (WVS) data set. The comparison showed that our methods captured better detail and accuracy in some instances, as you can see from the images below (where the WVS is shown in red and our results shown in blue):

In addition to these results, we generated coastline in over 40 areas around the rest of the world to test the performance of the model in different geographic locations, to help us understand what areas need improvement.

A data set of the British Isles is now available to access via the ADMIRALTY Marine Data Portal - our platform for marine data sets held by the UKHO. This data is currently in the alpha stage and further improvements are being made.

A blog about digital, data and technology at the UK Hydrographic Office.

Find out about current vacancies at the UKHO